Now is about the time we're seeing more and more southbounders (SOBO). The crazy thing about SOBOs is that to start the PCT they have to drive to Hart's Pass in WA, then hike 30 miles north to the Canadian border (and northern PCT terminus), THEN they can start their hike. Manning Park in Canada is only 8 miles from the PCT northern terminus but it's illegal to enter the US via the PCT (but not illegal to enter Canada via the PCT- as long as you have the proper forms).

I met a SOBO today named Chopstakes (because apparently he has no utensils and uses his tent stakes as chopsticks. Gross.) with this awesome shirt a few NOBOs made for him at Crater Lake. In case it's hard to read, it says: 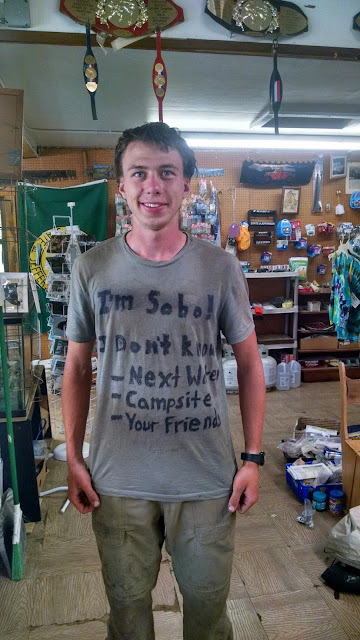 Posted by Derek Antrican at 2:36 PM

Email ThisBlogThis!Share to TwitterShare to FacebookShare to Pinterest
Labels: Non-automated