7/3: (0 PCT miles, but ~6 miles hiked) Hung out at VVR for most of the day. Had breakfast & lunch, used internet, and got some time to recollect my bearings before heading out again. Total cost at VVR: ~$78! $16 for 2 hrs of internet (they have satellite internet) and probably about $35 for food (breakfast and lunch). It was really good food but also really expensive food. The rest of the money was spent on random little things at the store. Around lunch time I met 4 other hikers (3 JMT southbounders and 1 PCT section-hiker southbound). We all had lunch together and had a fun time hanging out. Plus, we all split the cost of a whole apple pie a la mode! It was delicious! Headed out about 5:30pm (should've headed out earlier) and just made it back to the PCT before I decided to camp (didn't want to try approaching the next pass at night).

7/4: (17 miles) Meant to do more today, but it didn't quite happen. As usual- going over the daily pass killed the mood. Had lunch just before Silver Pass and just as I left to start up the pass, it started raining. Classic Sierras. Once I got over the pass and started going down the other side the heavens opened up and unleashed their wrath upon me- thunder, lightning, lots of rain, and- for the first time this trip- hail. This was the first time I actually pulled out my umbrella (first time used as a rain umbrella and not a reflective sun umbrella) and decided to wait out the rain. I stood under a tree with my backpack by my feet and my umbrella over my head for about half an hour before I decided it was safe enough to move on. Once again, JMT hikers are amusing. Shortly after my "rain break" I saw about 10 tents set up. This must be what goes through their heads: "Oh, it's raining? About 1pm? Better set up here and try again tomorrow!". I hiked up and down a couple small hills for the rest of the day before stopping at Duck Lake to camp. Camped with a Portland, OR couple that's also doing the PCT! They were awesome ('course who from Portland isn't awesome?)! Had a lot of fun sharing laughs with them before heading out the next day.

7/5: (11.3 miles) Hiked to Red's Meadow Resort just about 0.3 miles off the PCT. It's a hub for trailheads around the area (majorly Devil's Postpile and Rainbow Falls) and has a general store and cafe. I pushed out the miles to get there (again probably hitting around 3.5 mph!). On the way down the hill I got service during one of my breaks and got a little distracted...but made it to Red's Meadow at about 1:30pm and immediately went to the cafe and got a cheeseburger (~$10 for the lamest cheeseburger in the world. Disappointing.). But the general store had free WiFi (and pretty fast WiFi!) so I uploaded all the photos and such I wasn't able to do at VVR. Hung out there for a while and decided to go into Mammoth Lakes (there's a bus that runs from Red's Meadow to Mammoth Lakes for $7). Right before the bus I saw Beck! She has been busting out the miles! She [somehow] did 25 miles that day from about 7am to 5pm! So we rode the bus into Mammoth together and caught up. I stayed at the Davison St. Guest House for $35 with a few other PCT hikers. Mammoth's downtown was having a 4th of July celebration complete with a band, drama/stilts/skit/thing, and fireworks so I enjoyed that. Along with the dessert crepe I got at a restaurant nearby afterwards :) . Because I didn't have a real reason to go to Mammoth (I didn't have a box there or anything, just taking a holiday for the holiday) and am therefore royally screwing with my schedule, I'm going to be jumping up to my next box at Tuolumne Meadows. 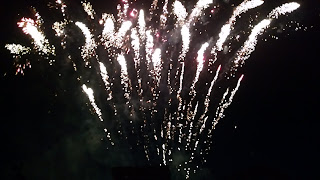